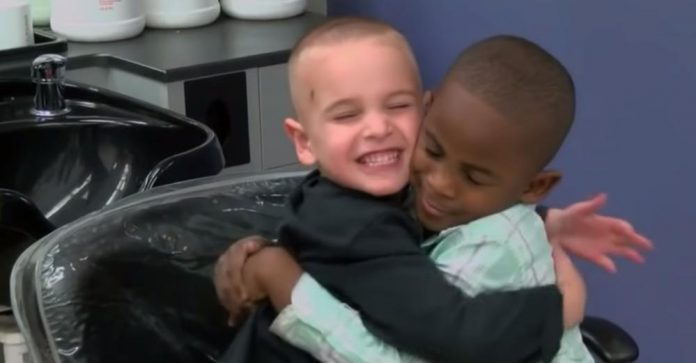 The story of two little boys and their plan to trick their pre-K teacher is going viral for the sweetest reason.

Last Friday when Jax Rosebush woke, his blond hair stuck up wildly all over his head. Mom, Lydia Rosebush, looked it and said “Jax, you have to get your hair cut this weekend.”

“We’re going to trick the teacher,” he told Rosebush.

Jax decided that if he and Reddy, 5, had the same haircut, no one would be able to tell them apart, including their pre-K teacher. Reddy apparently thought this prank was flawless as well.

“It is just two innocent boys. Obviously, they see they are different colors, they just don’t care. It is not important,” Rosebush told TODAY Parents.

She sees Jax’s inability to see a difference between himself and his friend as a parenting win.

“I just taught him to love everyone the same,” she said.

When Reddy arrived at school before Jax, he told the teacher and his classmates he was Jax. The teacher played along and pretended she was talking to Jax.

On Monday, Rosebush, who lives in Louisville, Kentucky, shared the story on the Facebook page Love What Matters; 78,000 people reacted to it and the story has gone viral. On the post she wrote:

“If this isn’t proof that hate and prejudice is something that is taught I don’t know what is. The only difference Jax sees in the two of them is their hair.”

While Jax loves watching himself on TV and the Internet, he remains unsure why his haircut became such a big deal.

“He still has no idea why people care so much,” Rosebush said. “He wanted to look like Reddy … now he thinks they look the same.”