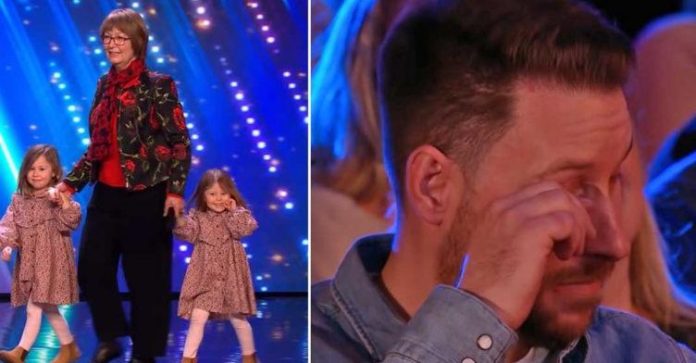 A Britain’s Got Talent audience member did an impromptu audition that left the audience in tears after his mother secretly entered him into the program.

After his sister-in-law presented them with free tickets to Britain’s Got Talent, Nick Edwards thought he was going on a date with his wife without the kids.

Nick, a property manager, was surprised to see his kids, Callie, 4, and Savannah, 3, with their grandma, Tracey, while sitting in the crowd. His mother, it turns out, secretly entered him in the tournament because she knew he would never do it himself.

Nick was given about 45 minutes to warm up before performing in front of judges Simon Cowell, Amanda Holden, Alesha Dixon, and David Walliams.

“They gave me my guitar, which my family had brought down that day, and they [producers] said this is the song we want you to perform since we saw it on your Instagram,” Nick remembered.

The 35-year-old father told the judges that he had “lost a lot of confidence” in himself over the years and had thus stopped singing in public.

“Hopefully I’ll be able to hold the nerves and sobbing at bay while I do this,” a hesitant Nick stated.

Nick then sang “Daddy’s Little Girl,” a song written by Ernie Halter, to his girls. He performed the song so beautifully that the judges were “in bits.” Host Declan Donnelly, who has a three-year-old daughter, couldn’t help but become emotional during the moving performance. After wiping his tears away, Declan turned to the camera and jokingly insisted: “I’m fine!”

“It was so sweet, you have a lovely voice,” Simon commented, while David confirmed that he had “4004 yeses.”

In an appearance on the British talk show “This Morning,” Nick said he was “in tears the whole day pretty much” after his surprise audition.

“If I go out I’ve got two options here, I either go out and try to own it or I come out and it all crumbles… the whole thing just went so quickly,” he recalled. “I remember playing and my fingers getting a little rubbery, and I remember thinking, ‘This is going to be a significant time for you.’” “I don’t want to mess it up.”

As wonderful as the moment was, many viewers questioned its legitimacy because Nick was wearing a microphone before being called onstage.

However, Britain’s Got Talent promptly denied these claims and provided an explanation.

“We adored welcome back our BGT viewers after a year away last night.” “It would be inaccurate and inappropriate to report or refer to anything being manufactured or contrived regarding Nick’s audition,” a spokeswoman added.

When Nick entered the Palladium theater for the tryouts, he was approached to be a part of the program’s “gogglebox” audience, according to the show. They mic’d him up to record his reactions while he sat in the crowd throughout the day.

“He was completely unprepared. “We did this so we could mic him up without him knowing,” they explained. Nick said the entire experience had been an “emotional overload” but “amazing.”

“I feel this opportunity on Britain’s Got Talent has definitely given me the confidence that I’d lost and that’s why it was also so emotional, because I previously lacked the acceptance that I needed to move forward,” he said.

Nick started performing at the young age of six in church choirs. By 15, he started writing his own songs and performing in bands with friends and as a solo artist at local pubs and venues.

However, after becoming a dad to his son Jack at 25 years old, he “lost touch with music” because his priorities had changed. But after his audition for Britain’s Got Talent, Nick said that his passion for music had been reignited.

We wish you luck on your journey, Nick! Watch his emotional performance in the video below.