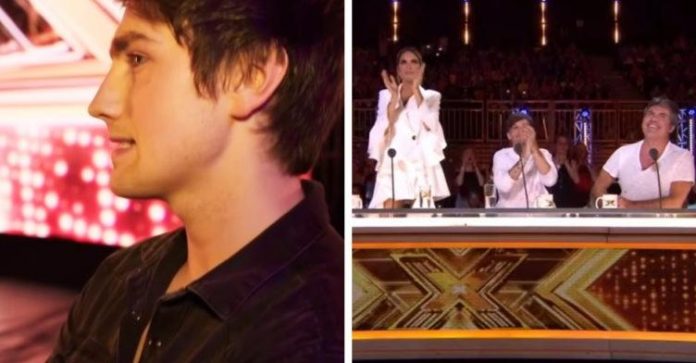 Brenden Murray, 21, of Galway, Ireland, took the “X Factor” stage. and initially performed an awkward rendition of “We Don’t Have to Take Our Clothes Off.” Unfortunately, the judges were not impressed with his song selection.

Surprisingly, Simon extended a second chance to Brenden. He suggested that he return a little later and try singing Kate Bush’s “This Woman’s Work.” Brenden gratefully accepted the chance for another chance and set out to learn the song in the few hours he was given. However, Brenden’s second audition nearly failed as well. “Over the past few hours, I’ve just been trying to learn this song, so I hope you like it,” he said nervously as he took the stage. The music began, and Brenden attempted to sing the song, which began in an almost impossible-to-sing falsetto. His nerves are obvious, and they affect his pitch.

Brenden was clearly struggling and decided to end the audition soon after it began. He swallowed and apologized to the judges. “Think about the words,” Simon wisely advised. Make certain you hit the big note at the appropriate time.”

Brenden restarts the music and begins singing again, deciding to give it another shot. His voice is stronger this time, but he is clearly having trouble. He comes to a halt again at the same location. He couldn’t seem to recall the lyrics at this point. Simon, for some reason, still had faith in Brenden. He gave him a rare lifeline: “Let him read the lyrics.” Brenden happened to have the lyrics on a scrap of paper in his back pocket. He eagerly took it out and cued the song for the third time.

Brenden flew past the spot where he had previously stopped, and his voice grew louder and louder. The crowd starts cheering, and he becomes more confident. As the song neared its conclusion, Brenden really got into it and delivered an incredible second half of a performance. As he sang his heart out, he crumpled up the piece of paper with the lyrics and tossed it to the side.