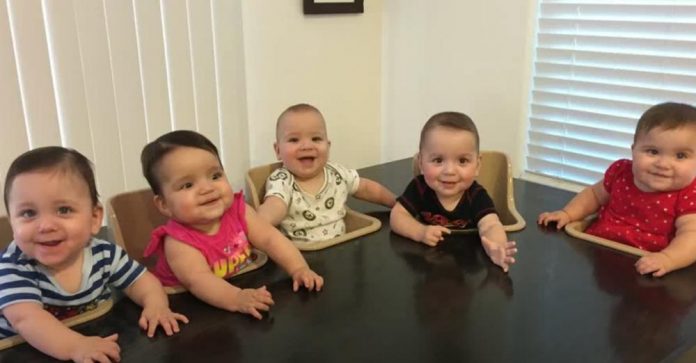 After trying for two years to have a baby, successful fertility treatment in 2012 allowed Amy to give birth to twin boys. Sadly, they were born too early and never made it home from the hospital.

But they tried again and ended up having two healthy daughters, Savannah and, two years later, Avery. The surprise came when they decided to complete their family with a third child.

It was Chad who wanted to have a third child. Amy had already been through a lot, and her pregnancies weren’t quite as magical as people make them out to be after having lost two children.

“I had a lot of one-on-one time with Savannah because I was a stay-at-home mom,” Amy told Parents Magazine. “And then when we brought Avery home I was outnumbered during the day when Chad was at work. That was an adjustment. I didn’t have as much time with Savannah so then I felt guilty. I started getting depressed because being a mom to any number of children is hard. Trying to get pregnant and the miscarriages along the way I thought, I’m kind of okay with two.”

More than they bargained for

Eventually, Amy came around to the idea of having a third and final child. But when the couple got pregnant again, they were absolutely shocked by the results of an ultrasound.

Not only were they worried about Amy carrying them to term after their tragedy with the twins, but they were understandably concerned about having 5 newborns at once.

But the babies were born in January of 2018 and all of them survived. Amy delivered them at 27 weeks, and the quints spent 63 days in the NICU before heading home.

Amy and Chad had never planned to have a family of 7, but Lincoln, Noelle, Grayson, Preston, and Gabriella joined Savannah and Avery as the family moved to Idaho to start their new adventure.

The couple is very honest about their struggles, including how they’ve sacrificed date nights for couples therapy. Much of the time, they describe themselves in “survival mode.”

But they’ve managed to channel that struggle into a YouTube vlog called “Quint Hacks.” They’ve even set records in the Guinness Book of World Records for Chad pushing the quints in a stroller through an entire marathon!

With two young girls and 5 newborns, the Kempels had to come up with a new way to live. One of the first things they did was get rid of most of their furniture to transform their house into a space that focused on the children.

Since then, the couple has posted a series of videos of the ways they’re “hacking” parenthood, including how to feed, clothe, and change diapers for a fivesome. Their dining room table, for example, has five holes with high-chairs under them to keep the kids in place until everyone is fully fed.

Alas, as of this week, they’ve decided to end their social media presence, but the videos they’ve already made remain on their YouTube channel.

Be sure to scroll down below for a video summing up a few of their earliest “quint hacks.”