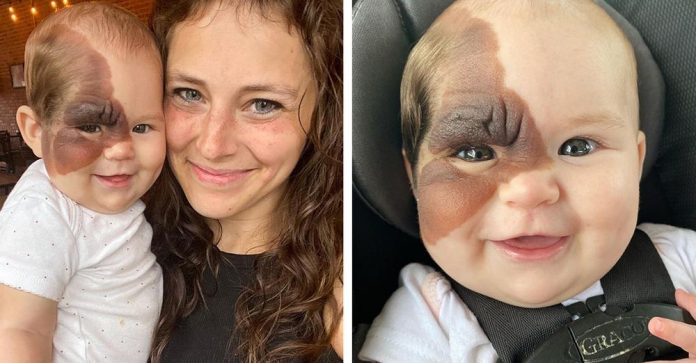 Birthmarks can be quite special. After all, they stay throughout one’s life. And while, at times, they could look odd to others- they are special and unique. This is the story of little Winry, who was born with a birthmark that made her pretty special. She was born to Nicole Lucas Hall, who also has a son named Asher.

Winry is quite extraordinary- for her mother is a fierce warrior. After all, who would fight every day to ensure that her daughter knows she is beautiful? The 13-month-old baby was born with a mark that covers 25% of her face. Interestingly, when Winry was born, things were different. Her parents were naturally quite worried- having never seen a mark like this.[1]

Girl With Unique Birthmark Has A Really Strong Support Behind Her

Nicole and her husband had assumed that the birthmark was something dangerous, but doctors told the parents not to worry as the mark was purely aesthetic.  Winry was born with CMN or congenital melanocytic nevi. This rare condition affects only 1 in 50,000 births.

Speaking to Good Morning America, Nicole said, “When they first handed her to me, I thought it was a bruise. It was then quickly apparent to my husband and I that it was not a bruise. And like the name, I thought it looked a lot like a mole.” Being a mom in the 21st century, Nicole decided to deal with this in a different way. She utilized the power of social media to spread awareness about differences. “For a lot of people, this is the first time seeing a birthmark like hers and that’s part of why I enjoy sharing. This is a good conversation for parents with their children to see kids have differences, or for those parents who do have a kid that looks like Winry or has any kind of a birthmark to see their child represented.”

Although Winry’s birthmark could be a potential cause for an increase in Melanoma, her mother has other worries. “Her health and happiness are our top priority. We have to monitor her with sunscreen. I’m careful with hats and that sort of thing. I know our regular dermatology appointment is probably going to be our best friend growing up.”

Speaking about Winry, Nicole mentioned, “She just radiates joy. She’s almost always laughing or shrieking. She is just the happiest baby I have ever seen. She’s a big talker already. We haven’t got a whole lot of words out, but she tells you like it is and she’s already getting a little bit of sassiness, so I think we’re gonna have a lot on our hands.”[2] 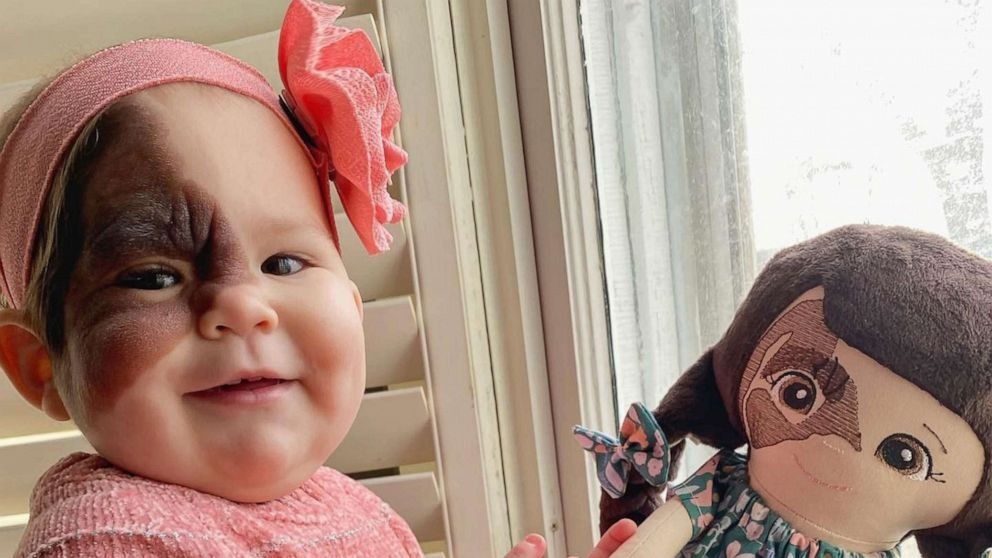 Nicole, being the ever-attentive mother, has reached far and wide to research the condition. “We’ve got to talk to several people from Brazil with birthmarks. One of them has one that is almost identical to Winry and it’s been so fun to talk to her because she’s almost exactly my age.”

Hall is pretty clear about her daughter’s birthmark. “For a lot of people, this is the first time seeing a birthmark like hers and that’s part of why I enjoy sharing. This is a good conversation for parents with their children to see kids have differences, or for those parents who do have a kid that looks like Winry or has any kind of a birthmark to see their child represented.”

Now, let’s move on to Asher, Winry’s older brother. Although not exactly an adult either, Asher is already quite taken with his sister. As Nicole reports, Asher doesn’t really think there is anything wrong with Winry. Her birthmark is just that- a birthmark. It wasn’t any different than having different eye colors. Although he can get jealous of Winry taking more of their mom’s time- this would definitely give way to love and devotion.