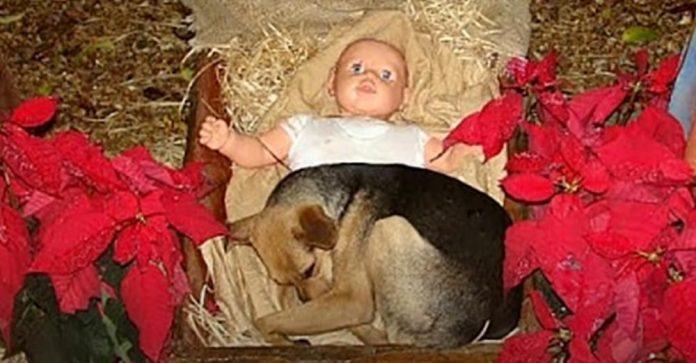 With the holiday season just around the corner, people are out singing, lights and lanterns litter the streets, and houses are beautifully decorated for the Christmas season. For our Catholic friends, Belen and the nativity scene is the most important part of Christmas.

Belen means Bethlehem in Spanish, and that was the birthplace of Jesus, as many of you know.

The Belen also can refer to the crib or manger of Jesus. That word is commonly used for the nativity scenes found all across the world during holiday times. In Spain, these are often located in the town and the main trafficked parts of the town.

In a recent YouTube upload, a small dog stole the spotlight from the whole nativity scene.

In 2008, in a city in Brazil, a small puppy found his refuge in the nativity scene at the heart of town. Just like Mary and Joseph sought refuge and eventually settled in the cattle stall, the little puppy had nowhere to go until he found the manger scene. October is a colder time, and this is when the families during Mary and Joseph’s time would have traveled to Jerusalem for the Holy Days.

Because the population of Jerusalem was swelling, the small nearby towns often welcomed mass visitors. There were not very many options for people to stay. So, Joseph and Mary had to resort to the manager, just like the pup. Both people just wanted to make it through the night, and they both found themselves in a familiar place.

The dog was warmed by the nativity scene with all of its hay and decorations.

The puppy’s parents were Joseph and Mary for that night. They watched over him and kept him safe, although they couldn’t actually speak, they would have told him stories of their travels if they could! He got to sleep right next to baby Jesus and found comfort from the angel that was standing next to him as well. He also had a few different friends near him, as the plastic animals provided a bit of companionship on a cold night.

The next day, the townspeople chuckled as they realized that there had been a new addition to the scene.

The dog was a cute attraction for the city as he slept right next to baby Jesus. Bystanders began snapping pictures and gushing over the cute puppy. He was in a comical situation, but he handled himself well. The videos and photos taken will live forever on the internet. The comparison between the little dog’s journey and Mary and Joseph’s is just another reason to enjoy the holiday season.

The holidays are a time for giving, and unknowingly, the nativity scene was giving the puppy a place to stay.

The little guy was hopefully adopted by someone with a good heart and the ability to provide for all of his needs. He deserves love and support, and a family that he can call his own. If you see someone in need this holiday season, don’t hold back! Do what those animals did for Mary and Joseph so many years ago, and provide them with a way to make it through the night.