This bond is usually much greater with children, and it seems that they connect better with animals and like to spend time with them. An emotional moment like this was captured by LadBible, who shared a video on Instagram in which they give a child his new pet.

The young man does not contain his emotions and begins to cry with happiness, while he embraces the puppy and brings his face close to him. A very emotional moment for the family members, who told him that it was his, so that he would know that no one would take it out of his life. 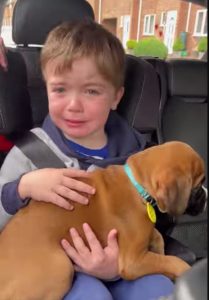 Perhaps he did not believe that the dog was for him, that is why his reaction has moved many users who are excited to see the love he has for his new pet. In the comments, some followers wrote that I hope he maintains that affection and takes good care of him. Others emphasized that there are children who treat their pets badly and it is these types of children who deserve to have dogs at home. 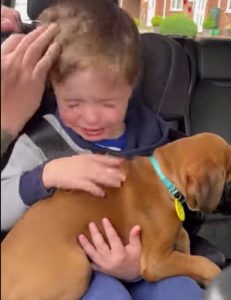 It is incredible the way in which he expresses his happiness, as if it were a father meeting his son for the first time and caressing him non-stop. Even in a part of the video, it can be seen that he kisses his back, wanting to show him that he is well in his arms. This puppy is a lucky one, he will surely be a great playmate, a being with whom he can live many adventures together.

They are both very young, so neither will lack energy, although now this child will have certain responsibilities. He must guarantee the care, cleaning and feeding of this puppy, although of course, his parents must help him in the process.