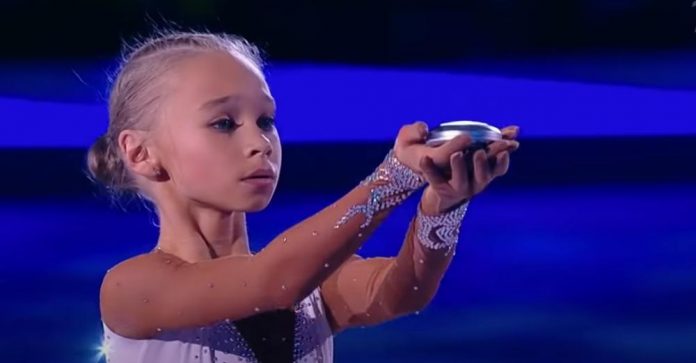 We’re always impressed with children who perform in front of crowds. Not only do they have to master a craft, but the audience pressure adds a whole new level of skill to what they’re doing.

And while Veronica Zhilina looked a bit nervous as she first took her place on the ice, that soon went away as her desire to put on a perfect figure skating routine took over (not to mention the attention it takes to execute some of her moves!).

A delicate routine but a fierce competitor

At the beginning of her routine, she holds an orb of light, which she then shows the audience as they raise their own like they’re at a concert.

Once her mind is set on her performance, she’s all in.

And it’s hard to argue that anyone does figure skating better than the Russians. Even children manage to so incredibly graceful while executing maneuvers so perfectly.

It’s unclear how old she is in this video from 2019, but it is a children’s (or at least a junior) competition – and presumably in Russia since the judges are speaking the language.

The song she’s chosen for her performance is the melancholy “Hallelujah,” original by Leonard Cohen but in this case performed by Alexandra Berk, who recorded the song after performing it on the 2008 season of X-Factor.

Its melody and crescendos are ideal for a dance routine that also includes a few big moves.

The next big thing?

Russia has no shortage of figure skating superstars. But get this: Veronica Zhilina turned 12 in 2020. That means she was either a mere 10 or 11 years old last year during this performance.

We were lucky if we could still do a good cartwheel at that age, but to be fair we weren’t practicing.

If the Instagram account @talented_skaters is to be trusted, Zhilina and her sister were poised to join the skating academy won by former Russian skating superstar Evgeni Plushenko’s academy. That follows two age-based championships as an appearance on the reality skating competition “Ice Age: Children.”

“In her arsenal are a quadruple toe loop, salchow, and a triple axel. On May 15, the skater will turn 12 years old.”

Already among the greats

According to Russian news sources, she can – as of this year – add the technically mind-blowing quadruple Salchow to her skillset, becoming the youngest female skater in the world to pull it off when she was just 11.

“Having mastered that, she went on to successfully nail a quadruple toe loop and a triple Axel, establishing herself as one of the most technically gifted skaters of her generation,” they said.

Clearly, COVID has not stopped practice sessions at the skating academy!

As her talents continue to grow, some suspect she may become one of the finest and most technically-gifted skaters the world has ever seen. Of course, there’s a lot that can happen between then and the next World Championships or Olympic Games.

After her spectacular performance at this competition, she talked to judges, exhibiting a quiet put polite demeanor, even if we can’t translate exactly what she said.

And at the very end, nothing showed her age more than being handed her tiny puppy to say hello to after a stunning showing.

Be sure to scroll down below to see it all – it’s a beautiful performance and it’s hard to believe someone so young pulled it off so well.