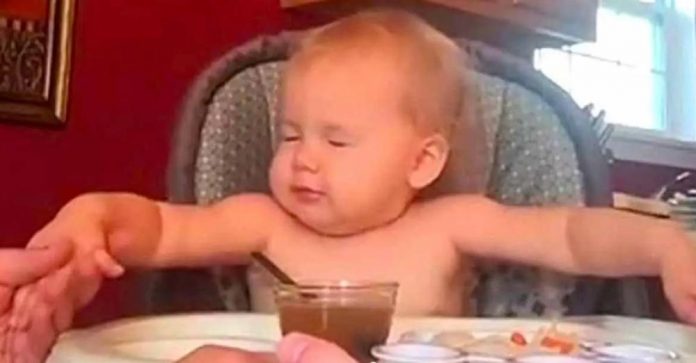 Teaching children to pray, starts with them thanking for their food. But we all know that babies and dinner time is not always a good combination. It will always be messy and sometimes, with a lot of crying.

But an adorable video has gone viral where it shows one little girl with the table manners that any parent will surely be proud of.

It is a 15-second video clip but it is enough to touch the hearts of millions of viewers all across the globe. In fact, the clip has already been viewed almost 1 million times on YouTube. Some reports say an early Facebook clip earned 38 million views as well. The clip has been shared more than 1.5 million times since it was uploaded online.

In the video, John Incorvaia wrote in the caption: “This kid … always closes her eyes when we pray, and never wants to be done praying lol – we probably pray 4-5 times before our meal every night. ????”

The video clip shows a baby adorably saying grace at the table with her family. The baby girl in the video is 20-month-old Eloise Incorvaia. Her dad says it’s time to pray and you should see how she reacts.

It’s so adorable that you will want to shower her with kisses. When her dad says so, Eloise immediately reaches out her tiny hands towards her parents. She then closes her eyes tight and listens carefully to her father’s every word. The dad then gives a moving prayer thanking God for the food and for his “beautiful girls.”

And when he comes to the end of the prayer, Eloise joins her parents in saying “Amen!”

Liz and John Incorvaia first shared the video online in 2016. Back then, they were residing in Indianapolis, Indiana. But now, they live in Waterville, Ohio. Here, John is the Director of Family Ministries at Zion Evangelical Lutheran Church.

According to her family, Baby Eloise loves to pray so much that she makes them go through the tradition multiple times each day before meals. Well, nothing is wrong if the girl just loves to say grace, right? And for sure, she can certainly give an enthusiastic “Amen!” A typical 20-month-old toddler has a spoken vocabulary of about 12-15 words. And no doubt, for Eloise, it looks like “Amen” is among her favorites.

When the video was first made public online, Eloise received national attention. In fact, she was featured on Fox News, The Ellen Show, and The Today Show. The parents also joined Fox and Friends Weekend after the video went viral. They happily told the hosts that they want to instill a love of God in their children that they can always take comfort in.

Aside from Eloise, the family now has a daughter named Penelope as well as a newborn son. Eloise was still too young in the video to know the meaning behind praying and saying grace to thank for her blessings, it shows us that praying is not only for those who truly understand. But this practice will be carried on until she gets older.