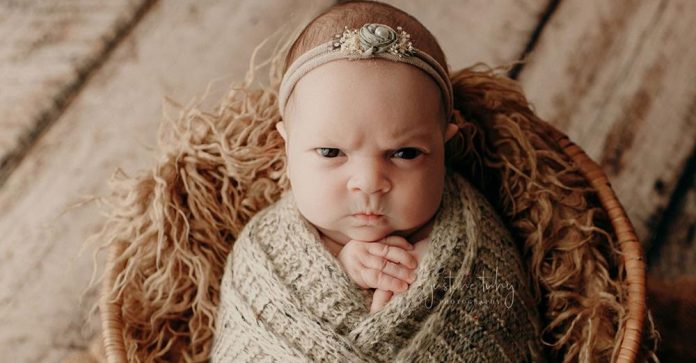 Its almost a right of passage, when you have a baby you get the pictures right? Well, one baby girl was not about that life.

Three-week-old Luna Musa of Westerville, Ohio, has taken over the internet with her seriously precious mean mug —  turns out the mastered look was documented in all of her newborn photos.

Justine Tuhy, who photographed the session, described the little grump as “the best baby facial expressions I have ever captured!”

Despite being completely unappeased, Tuhy claims she wasn’t upset or fussy during the photo shoot.

“She was completely content,” she said to the New York Post. “She just gave me the stare-down the entire time.”

“Mom and Dad both said she came out with this same face! I just love it!” Tuhy wrote on Facebook, along with a selection of hilariously upset photos of baby Luna. The post has garnished over 12,000 comments and been shared over 55,000 times.

According to Luna’s dad, Christian Musa, 30, Luna has “been mean-mugging since day one,” he told ABC News.

The baby’s look struck a chord with other parents, who found the shoot hilarious and shared baby photos of their own kid’s faces.

“It’s like she’s an old soul and she’s thinking what in the hell am I doing back here?!!” said one comment shared, along with “this is greatness.”