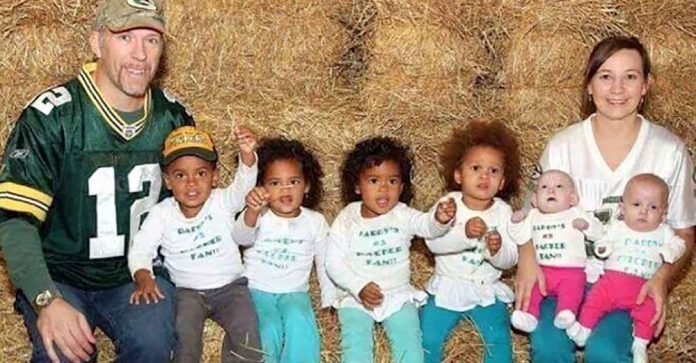 Carrie and Craig Kosinski decided to do the right thing when an old friend of the family asked them to take custody of her young twin girls.

Initially taking the girls on a trial basis, the Kosinskis quickly fell in love with them and made them a part of their family for good!

They had no idea at the time that this was the beginning of a crazy journey that would lead them to a very unexpected ending.

The Kosinskis had been looking after the twins, Kenna and Adalynn, for a year when their biological mother reached out to them once again.

She was still having a hard time making ends meet and wanted to know if Carrie and Craig would be willing to look after her other set of twins, a 2 year-old brother and sister named J.J. and CeCe.

The Kosinskis had to think long and hard about this, as they knew it would be a huge sacrifice.

“It was a difficult decision,” Carrie said. “We were trying to get pregnant ourselves. But they were siblings so that was definitely was part of our consideration – we wanted to keep the siblings together.”

They ended up deciding to adopt the second set of twins as well.

However, it was just a few weeks later that the Kosinskis got the surprise of their lives.

Just weeks after the adoption was finalized, Carrie learned that she was pregnant with not one, but two babies!

Yes, she was pregnant with ANOTHER set of twins, bringing the family’s total to three sets under the age of 5!

Making things even crazier is that all three sets of twins share the same birthdate of February 28.

“God has a sense of humor,” Carrie said.

Sadly, Carrie’s twins were born prematurely at just 25 weeks, so they had to spend months in the Neonatal Intensive Care Unit (NICU).

Thankfully, they are finally home with their family where they belong!

You can find out more about this family in the video below, and please SHARE this story so your friends and family can see it as well!