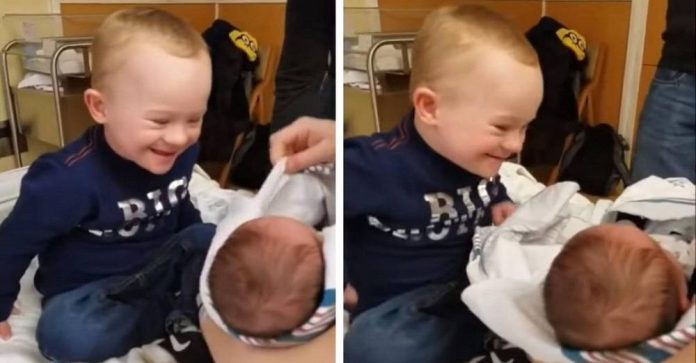 Children have different reactions when it comes to finding out they’re going to have a sibling. Some are excited. Some are unhappy. Some are even sad verging on angry if they want a brother instead of a sister or vice versa.

Thankfully, parents have 9 months to prepare the big brothers and big sisters for the new baby’s arrival. With the help of videos and books, parents have abundant resources to show the big siblings what they can do to help and how their lives will change.

The moment of truth is when the big brother or sister gets to meet the new baby for the very first time. Sometimes something unexpected happens, such as one little boy who asked his parents a question they weren’t expecting, but some interactions are so sweet beyond words.

Kent is a 4-year-old boy with Down Syndrome, and he recently became a big brother. In a video recorded at the hospital where his baby brother was born, you see him wearing a shirt that says “Big Brother” while he excitedly runs down the hallway holding a teddy bear. He’s moving so quickly that his dad can’t even keep up.

Kent waits for his dad before entering the hospital room, a huge smile on his face. According to his grandmother he “had been waiting so long for this moment, so excited to meet his Little Brother!”

When he enters the hospital room, the camera pans over to Mom who is sitting in the hospital bed holding the new baby. Kent so sweetly tries to give the teddy bear to his baby brother, but at this point, he still can’t see his brother very well.

Dad lifts Kent up onto the hospital bed so he can get a better look at his brother. His grandmother perfectly sums up Kent’s reaction to meeting baby Noah. “Kent’s reaction to seeing his little brother for the first time is one of the most beautiful things I’ve seen in my entire life…. just priceless! True Love!”

Even from just this short video, we can already tell that Kent and his baby brother Noah will be best friends. As his grandmother puts it, “Kent is going to be the best big brother. He is the most loving boy in the world. He really loves everyone…. whenever he enters or leaves a room he has to hug everyone in it.”

Watch the video below to see this sweet moment for yourself. We found ourselves smiling along with Kent and fighting back tears of joy. It’s that sweet.