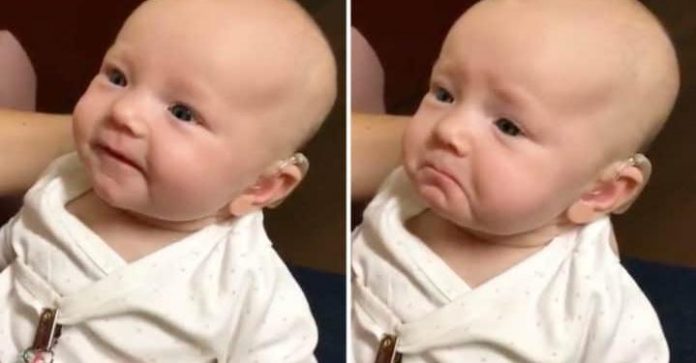 Many of us take hearing for granted every single day, but a new video is going viral that reminds us that the ability to hear is precious and a blessing.

Christy Keane and her husband were ecstatic when they welcomed their second daughter into the world. When baby Charlotte was just a few months old, however, it became painfully clear that something was wrong with her.

Doctors ordered hearing aids for Charlotte, but they warned Christy that they may not work for her, so she shouldn’t get her hopes up. Christy knew that she would give Charlotte all the love she had, so she was not worried about her growing up deaf. The only thing that bothered the mother was that Charlotte would never hear her say “I love you.”

Finally, the hearing aids arrived, and Charlotte silently prayed that they would work for her daughter. When the doctors turned the hearing aids on, Charlotte’s little face immediately lit up! Sure enough, they worked for her!

Hearing her mother’s voice made Charlotte break out into a huge smile. When Christy then said the three words she had wanted her daughter to hear, Charlotte looked as if she was holding back tears. The powerful moment was captured in the video below, and it’s sure to make you tear up as well!

Check out the moment Charlotte hears for the first time, and SHARE this story so your friends and family can see this as well!