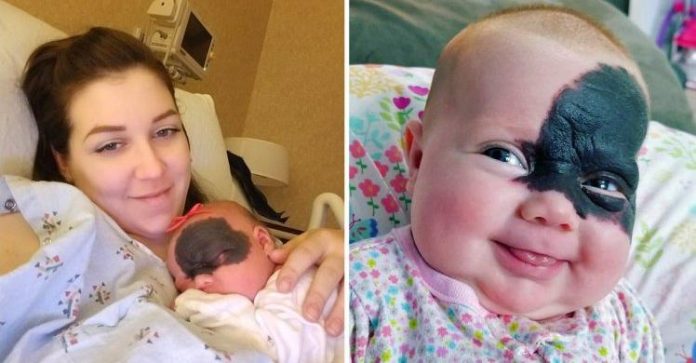 Some superheroes aren’t made, they’re born.

A baby named Natalie Jackson of Sioux Falls, North Dakota is turning heads everywhere she goes, and not just because she’s so stinking cute! Natalie was born with a black birthmark covering a portion of her face, giving her a unique appearance that her parents call her “superhero mask.” 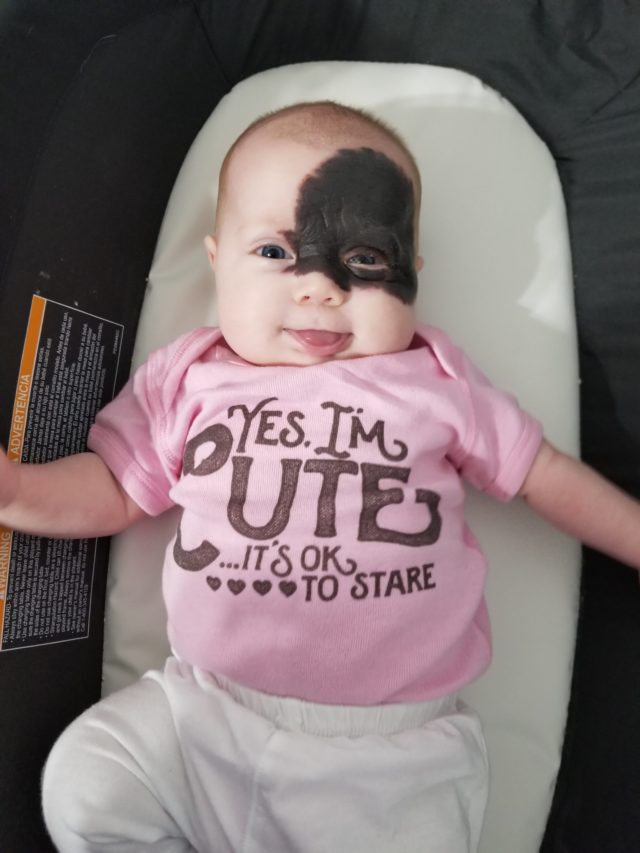 When Natalie was born, she was perfectly healthy aside from a mark on her face that her mother, Lacey Jackson, assumed was a bruise.

“Hearing her first cry was so special. Then the nurse lifted our girl up, after my c-section, and I saw the big black mark on the left-hand side of her face. She was so beautiful, but it looked like a bruise and I was worried in case it was something I had done to her during my pregnancy,” she said. 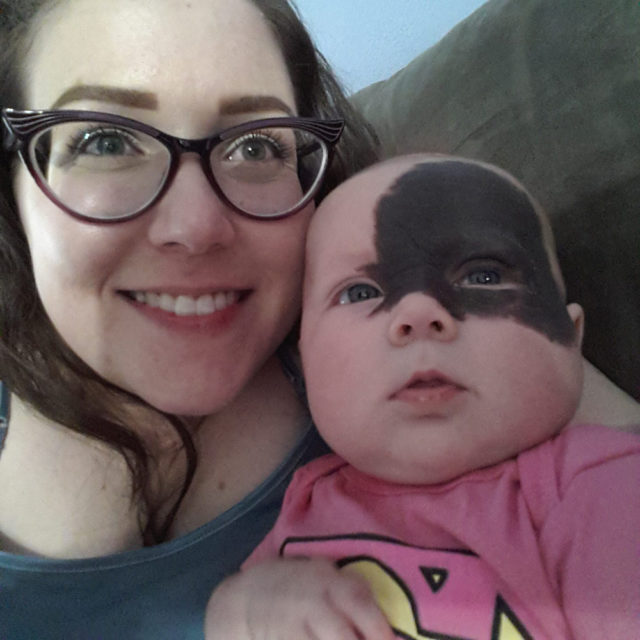 After hospital technicians examined the infant, they determined that the bruise was actually a birthmark. Lacey admits that at first, she and husband Andrew were “filled with panic.” But as soon as the medics told them that Natalie was healthy and breathing normally, they realized Natalie’s birthmark was no reason to panic.

In fact, the family has now decided not to have the black mark removed, hoping people would learn to accept the child for who she is, not what her skin looks like. 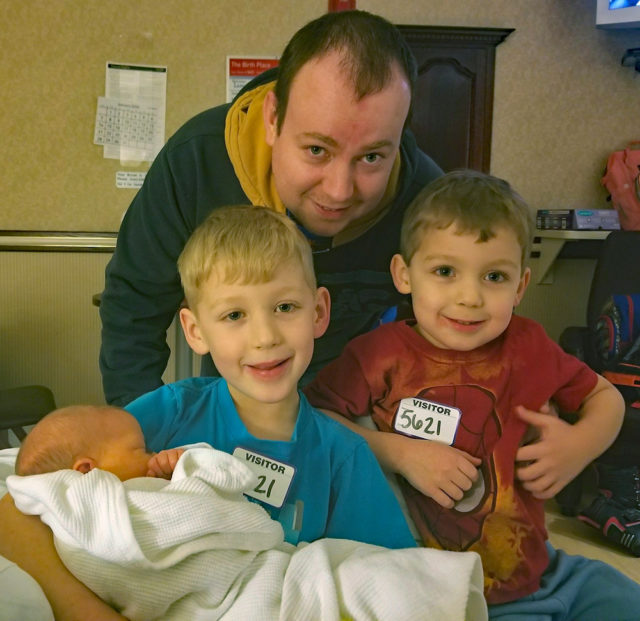 “As I cuddled our gorgeous baby girl, feeling enamored by her, I worried that people might just see her for her birthmark, and not the beautiful person I knew she would grow to be,” Lacey said.

When the family’s two older sons, Elliot and Devin, first met their baby sister, the “Batman and Robin” fans instantly came up with the superhero nickname. “One of the boys asked, ‘What’s that on her face, Mummy? What’s the black mark?’ I told him it was her superhero mask,” Lacey remembers. “I told them that, because of it, she could achieve anything.” 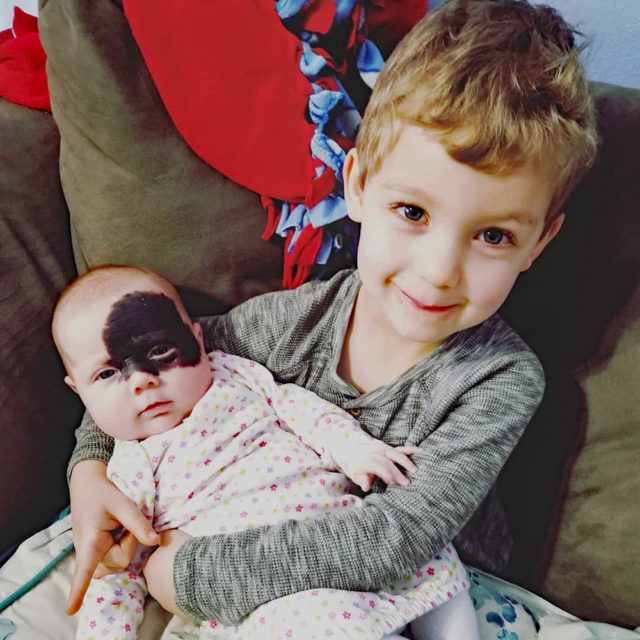 The Jacksons took Natalie to see several specialists to ensure that the birthmark was not interfering with her vision or putting her at risk for skin cancer, and when they learned that it harmless, they decided to just leave it be. Their only worry is that others will be cruel to the child because she is different, but they feel strongly that strength of spirit will buoy their daughter through even the toughest storms.

“We know she will come up against some difficulties, but her mark means she is going to be strong no matter what life throws at her,” said Lacey. 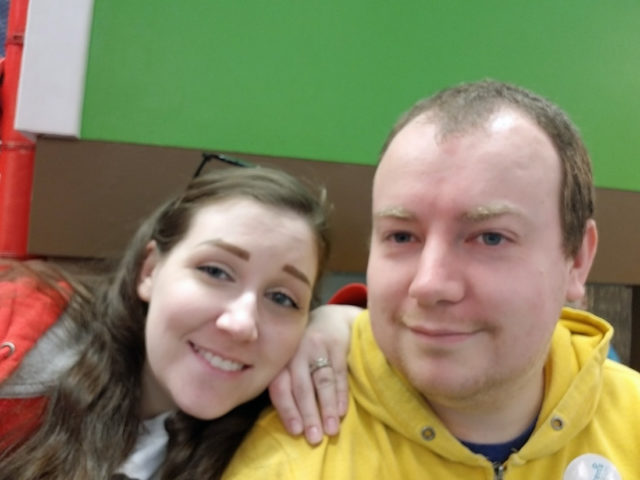 For now, people who meet Natalie are charmed by the child’s bubbly personality and cute, chubby cheeks.  Her birthmark definitely sets her apart, but not in a bad way. “People tell us how amazing her birthmark is and how gorgeous she is and we couldn’t agree more.”

Natalie’s doctors say that her birthmark will grow along with her, so it will always cover a large portion of her face. The family will continue to support her as she grows older and encounters more surprised glances from strangers on the street, but for now, they hope people continue to be kind to the little girl who was born a superhero. 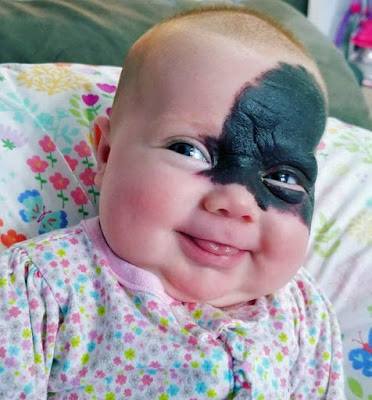 “We’ll always tell her it’s a part of who she is and who she is supposed to be. People will always know how special she is with her birthmark and how amazing she is inside and out. It’s good to be different and as long as she embraces it, she will be stronger because of it,” Lacey concluded.

We think you look beautiful, Natalie!

Please share this story to spread awareness for people with birthmarks like Natalie’s, and to encourage acceptance and kindness for everyone who looks just a little bit different.