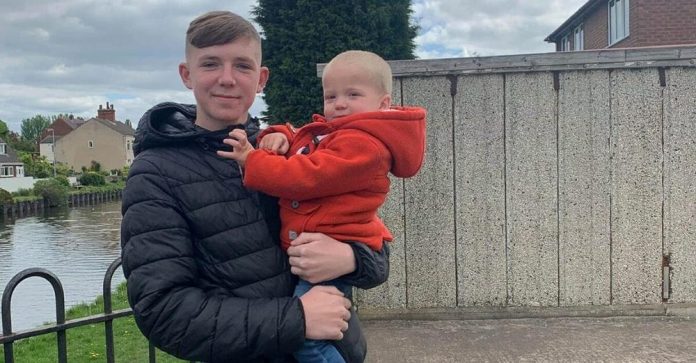 It’s every parent’s worst nightmare: One moment, your child is in sight, toddling around, safe and not getting up to mischief, and the next moment they’ve completely vanished.

Mom Becca Hampton from Knottingley, West Yorks, England, has two children and experienced that terror recently. On Sunday afternoon, her son, 15-month-old Reggie, was out in the yard when he somehow managed to get out through a makeshift gate and headed for a nearby canal.

Thankfully, 15-year-old Ryley Ferguson was nearby, walking his pups. He saw Reggie walking toward the canal and heard as the boy fell into the water.

“Basically, I was walking the dogs on the other side of the canal and I could hear this little kid shouting us and waving,” he said, according to the Yorkshire Evening Post. “I realised how young he was and with him being on the other side I thought I need to go and get him or he’s going to go in.”

Once the toddler made it into the water, Ryley removed his jacket and jumped in. He reached the boy and started shouting for help, unable to drag the toddler out of the water alone.

“Since it’s happened I’ve been ok, it doesn’t feel real and I did what anyone else would do, it’s just lucky that I was there because 30 seconds later, he would have been dead,” he said.

He’s since been hailed as a local hero, and a very grateful Hampton has dubbed him a “guardian angel.”

“Knottingley has a new HERO,” Susan Dann posted on Sunday. “RYLEY FERGUSON from The Ridgeway.”

“While walking the canal today RYLEY witnessed an unaccompanied toddler fall into the canal from the opposite bank below Foundry Lane. Without further ado RYLEY immediately stripped off some clothing, dived in and swam across and saved the toddlers life. By the time RYLEY got there the toddler was submerged.”

“Our town is extremely fortunate to have a lad like Ryley,” Tom Gordon, a local councillor, said, according to the Daily Mail. “He’s a hero and he deserves to be recognised as such.”

The thanks has gotten back to Ryley’s parents, Amy and Michael, who are also proud of their son.

Related:
Student Had No Idea What He Found in Dumpster in Haiti 5 Years Ago Would Change His Life Forever

“We heard from one of the neighbours near the canal that they saw what happened and she said Ryley didn’t hesitate and jumped straight in after the toddler,” his mom said.

“If he had been seconds later that kid would have drowned and no one would have known where he went,” his dad pointed out. “He must have had somebody watching over him.”

Probably no one is more thankful than Hampton, though, who shared a photo of Ryley holding Reggie and said she’ll be keeping it as a reminder.

“Our hero right there with my boy,” Hampton shared on Tuesday.

“[T]his photo will be getting printed and put into a frame and put where Reggie can see it so he knows who his guardian angel is. Reggie will always know who his hero is and we will forever be in your debt.”