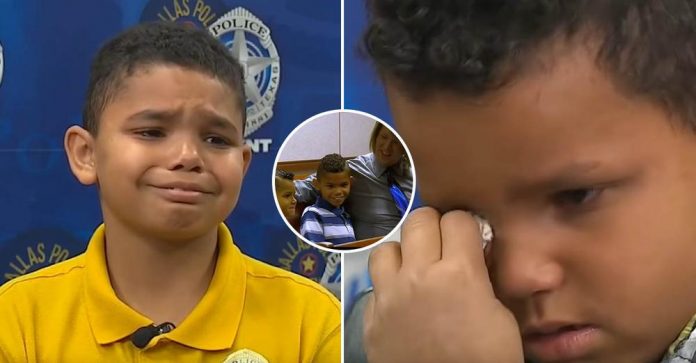 If you could have any wish come true right now what would that wish be? Two young brothers who had been in child protective custody for three and a half years had their lifelong wish come true and their reaction to the news is heartwarming.

Tre and Ke’lynn got separated and lived in separate foster homes — a situation that caused them so much pain and sadness. “I want to see him every day and I don’t,” Ke’lynn told WFAA.

Cynthia Izaguirre, WFAA news anchor met the two brothers in November 2017 when Ke’Lynn was 7 and Tre, 10. Cynthia could see right through the boys’ pain — They longed for each other’s company.

Tre and Ke’Lynn initially needed to spend time apart so that they could heal from their trauma but told the reporter how much they longed to be together.

“You guys are just about all each other has anymore, right? So you want to make sure you’re with him, right?” Cynthia asked Tre. He responded with a nod and immediately started crying.

The brothers were only allowed to meet once a month and it was really hard to separate them every time they saw each other. The siblings knew they had each other’s back.

When Cynthia asked Tre if he could have any wish, he said all he wished for was to live in the same home as his brother. “To live with him,” he replied.

One month later, a kindhearted man stepped up after he saw the Wednesday Child Story. Dr. Robert Beck said that when he saw the story he felt an instant connection with the two brothers.

“I was crying mostly because it just pulled at my heartstrings, and I felt an instant connection with the boys, and I said I’ve got to figure out a way to get these boys in my home and learn more about them,” Dr. Robert Beck said.

Tre and Ke’Lynn have lived with Dr. Beck ever since as they waited for the adoption process to be formalized.

On July 18, 2018, Beck and the boys drove to a North Texas courtroom. The brothers initially thought that they were just going into a store to take pictures, so they were caught by surprise after learning that they would be adopted that day. This was the moment that they have been waiting for and one could see the excitement on their faces after receiving the good news. Tre instantly smiled and gave Beck a little hug, while Ke’lynn couldn’t hide the huge grin on his face.

“Guess what? Today’s adoption day,” Beck told the boys as they sat in the courtroom.

“We got adopted today, and I feel good,” said Tre minutes after the judge formalized the adoption.

Seven months of anguish over being a part is over and these two brothers get to grow up together with a loving father, an older brother, and a village of helpers.

“Just being able to give them a forever home and know that they’re forever mine is just super special,” Beck said. “I love them. With all my heart.”

Watch the video below to learn more about this story.