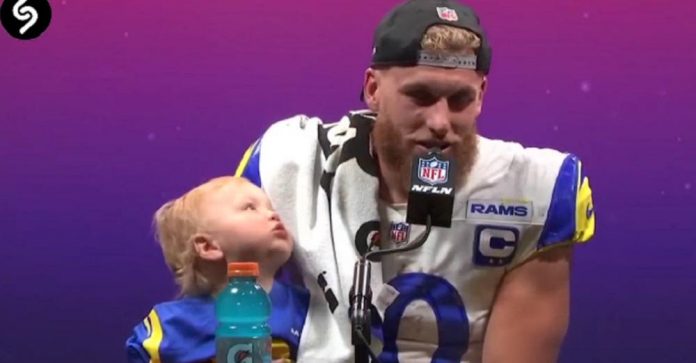 On that day, Kupp caught eight passes, two for touchdowns, totaling 92 yards, and also ran for seven yards, according to Sports Spectrum.

But after the game, Kupp had other things on his mind besides personal heroics.

“It just comes down to this team, how we’ve prepared, the way we’ve loved on each other, trusted each other,” he said.  “I don’t know, I don’t feel deserving of this. God is just so good. I’m just so thankful for the guys I get to be around, for the coaches, for my family.”

Kupp then took reporters on a journey to another place, and another time, where he had a vision from God.

“In 2019 we walked off the field that last time after losing to the Patriots; I wasn’t able to be a part of that thing,” he said.

Do we need more athletes to be open about their faith?

Only one other person knew of that moment until Sunday.

“I shared that with my wife because I couldn’t tell anyone else obviously what that was, but from the moment this postseason started, there was just a belief, every game, that it was written already,” he said.

“It was written already and I just got to play free, knowing that I got to play from victory, not for victory. I got to play in a place where I was validated not from anything that happened on the field but because of my worth in God and my Father,” he said.

Kupp was asked a follow-up question about the vision.

Kupp was not the only player to speak of God after the game.

“It’s the best feeling in the world,” LA defensive tackle Aaron Donald said after the game, according to The Sporting News.  “God is great. I’m at a loss for words. I don’t know what to say. This is a blessing.”

Kupp was not shy about expressing his faith in the week leading up to the game.

“I think the thing that He has taught me is that you will find that you are most fulfilled, you will find the most joy, when you are rooted in your purpose, and specifically rooted in His purpose for you,” he told reporters.  “That, to me, has been one of the best things about this year.”

Kupp said he does not play for trophies and awards.

“My motivation coming in every single day is to run the race in such a way as to honor God and the passions and the talents that He’s given me,” he said. “When I’m rooted in that, I am in a great place. I am able to play freely.”