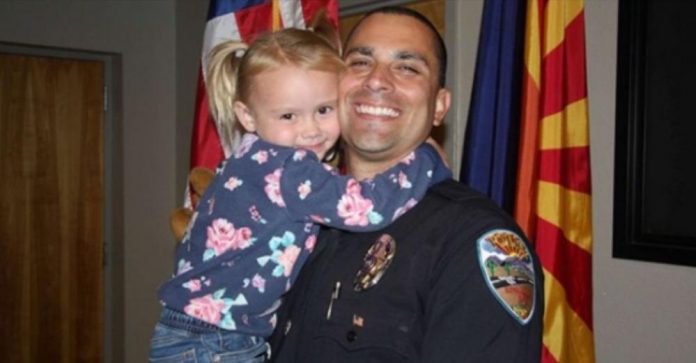 n March 2018, Lieutenant Brian Zach with the Kingman Police Department in Arizona had no idea that his future daughter was waiting for him at the next call he would respond to.

What Zach, then a patrol sergeant, did know was that when officers responded to the residence check, the toddler named Kaila who they found there needed help.

“We colored, we snacked … she held my hand and she was just this cute little thing,” Zach told ABC’s “Good Morning America.”

“Once detectives came, they picked her up and took her to the hospital.”

A survivor of abuse, the girl made a huge impression on the officer, who had two kids of his own with his wife, Cierra.

“He shows up, he’s like, ‘I got to hang out with the cutest little girl,’” Cierra told AZ Family. “‘She was so awesome.’”

The girl’s caretakers faced criminal charges, and Kaila had to be treated for her injuries, but Zach wasn’t done helping just yet. When the opportunity came up, he and his wife offered to house her.

“She came with a sippy cup, a bag of clothes that didn’t fit her and that was it,” Zach recalled.

She quickly adapted to her new arrangements, settling into calling Brian and Cierra “dad” and “mom” pretty quickly — though Brian had to work a little longer to earn the title.

“Within the second day she was calling my wife ‘mom’ or ‘mommy,’” he said. “I was ‘guy’ for a week or two and then when she started preschool she learned who dad was.”

“She’s happy and she’s flourished and when we got her she knew three words basically she grunted like a caveman, but she didn’t know how to talk,” he added. “And now she loves to talk.”

Their time with Kaila was precious, as they never knew what the next day would hold and whether or not her family would reclaim her.

“We lived each week not knowing if she was going to go back to her biological parents, or how long we were going to keep her,” Zach said. “Our goal was to love and care for this little girl for as long as it happened.

But 30 months after their first meeting, 4-year-old Kaila officially joined the family. Her place in their hearts and home was made official on Aug. 18.

“I had a lot of child abuse cases and there’s always kids that I would bond with and I’d love to take them out of bad situations and just bring them home,” Zach said. And now, he’d been able to.

Brian has certainly taken on the proud dad role, and he and his wife are staunch supporters of fostering.

“I would definitely encourage people to do it because there’s so many kids who need guys even if it’s just for a small amount of time you can make such an impact,” Cierra said.

“Lt. Brian Zach’s commitment to public safety is exemplified in his commitment and love for Kaila,” Kingman Police Department Chief of Police Rusty Cooper said. “Both Brian and his wife Cierra are amazing parents.”

“They are committed to the service of others and a cause that is greater than themselves. We are proud of Brian and thankful that he and his family are part of the Kingman Police Department.”