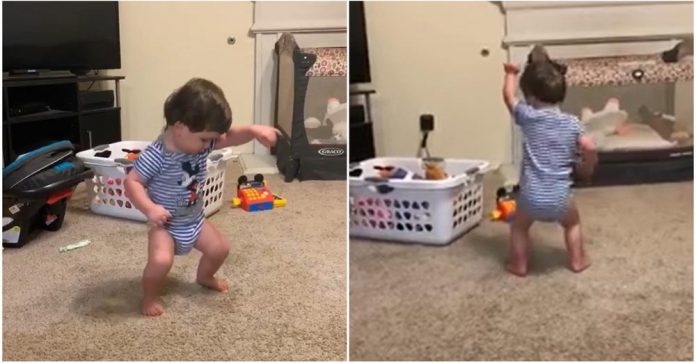 There really is no way to know or predict what will go viral on the internet, but there are some kinds of videos that will definitely have the tendency to be liked and shared by many. Baby videos and dance videos always do well, so when you combine the two, you might just have the recipe for a huge online sensation. When Jolene Taylor posted her toddler’s dance moves on social media, however, she had no idea that the video would be seen by millions!

And if you just take a quick glance at Jolene’s adorable baby, it’s not hard to see why he became such an internet superstar.

Just take a look at those hilarious and adorable dance moves! If he can already bust out these moves at such a young age, we can only wonder what kind of dancing he will do when he gets older. His energy and huge smile are incredibly infectious, and the toddler certainly has a good sense of rhythm as well. What more could you possibly need?

At the beginning of the year, there was one song that totally captured the internet by storm: “The Git Up” performed by Blanco Brown.

The song is incredibly catchy and has been the inspiration behind many ‘nomination’ challenges on Facebook. Aside from that, it’s also a very popular track on video-sharing applications such as TikTok. The hip-hop song went viral in its own right because everybody loved dancing to it and posting footage of themselves online.

“Gone and do the 2 step then cowboy boogie grab your sweetheart and spin out with em do the hoedown and git into it,” the song goes.

You can just tell how much this baby boy loves dancing to it!

What makes this whole thing even more special, is that this toddler has only just recently learned how to walk. One week later, and he’s already busting out these moves! It clearly doesn’t take much effort for him to act like a cowboy, because he’s doing the cowboy boogie and the two-step dance just fine. Learning how to dance right after you learn how to walk? It definitely seems like this toddler has got his priorities straight.

The fact that this toddler just learned how to walk can definitely end up in some funny moments. In the challenge, you’re supposed to put your hands up while leaning back at one point. However, the toddler loses his balance and falls forward. It’s just one of the many reasons why this video is just so immensely adorable to watch.

Jolene’s video on Facebook has got to be one of the most popular “Git Up” dance videos on the internet with over 12 million views!

The amazing dancing baby footage was shared by over a quarter-million users on Facebook, meaning this boy has been seen around the world and can truly consider himself an internet superstar. There are thousands of people who have already posted a video of their cowboy dance, and singer Blanco Brown actually uploaded a tutorial video of the Git Up Dance, so everyone can follow along easily.

If you’d like to check out the footage for yourself, you can check this toddler’s dance moves to “The Git Up” in the video below. You definitely won’t be disappointed!

Just started walking last week and already Gitten It Up #BabyGotMoves* Jukin Media Verified *Find this video and others like it by visiting https://www.jukinmedia.com/licensing/view/1062731For licensing / permission to use, please email licensing@jukinmedia.com