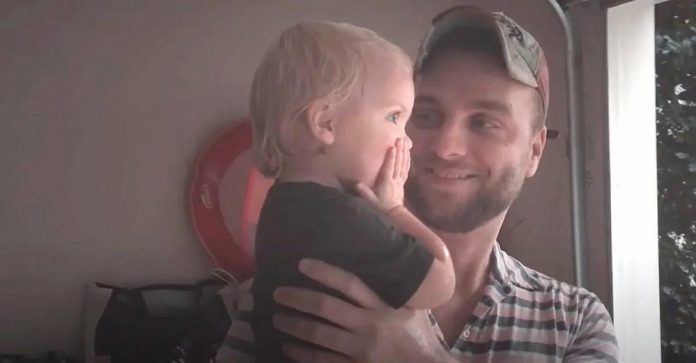 Most people get upset when it starts raining. This little girl has the complete opposite reaction.

When parents raise their babies, they’re excited about all of the firsts. The first smiles, the first steps, the first words.

All of those are incredibly important moments. But what about the first time they go out in the rain?

Many parents don’t think the first time that their baby was out in the rain was anything special. But this dad will always remember what his little girl did one summer’s day, when she got to feel the pitter-patter of the rain for the first-ever time.

In August, it started raining in the Swift family’s city. Harper, who had just started walking, had been looking forward to playing outside. At first, her dad thought that she would no longer want to go out. But she seemed keen to play, despite the weather.

So Harper’s dad picked her up and asked her if she wanted to go out in the rain.

Harper didn’t respond, but her dad could tell that she really wanted to be outside.

He ran out of the garage with Harper still in his arms.

Harper started smiling and laughing. She just loved feeling the rain pour down.

After a few seconds, Harper’s dad ran back inside, with Harper still in his arms. Harper reached outside again, desperate to play in the rain some more.

“More? You want more rain?” Harper’s dad asked. Harper smiled in response. So the dad edged closer to the outside. When they were almost out, Harper started laughing.

Then the dad ran out again, and Harper kept on laughing.

The dad ran back inside again. In the garage once more, Harper started clapping her hands. The dad joined in.

Then the dad set Harper down so she could explore herself. The dad took his daughter by the hand, and they both walked around in the rain some more.

Luckily, Harper’s mom was filming the entire thing. She then uploaded the footage onto the family’s YouTube channel. It soon went viral. To date, the video has gained over 6.2 million views. It also has more than 20,000 likes and 1,300 comments. People have been saying things like this:

But this wasn’t Harper’s first viral video. 10 months before the rain video, the family uploaded a video of Harper’s first-ever attempt at crawling.

The video began with Harper lying on the floor, looking at the family Labrador dog. She wanted to go over and pet the dog, but no one would lift her up. So she lifted her body up and started crawling to the dog.

The dog looked at Harper. Harper maintained eye contact with the pet, and a big smile spread across her face. She was determined to make it all the way to the dog.

Slowly but surely, the baby shuffled closer. Eventually, Harper got close to the dog. The dog, clearly proud of the baby, leaned forward and gave Harper a kiss.

This amazing footage has gained a stunning 23 million views to date.

Harper is clearly a very lucky little girl. She has two loving parents and a dog that showers her with affection. She is fast growing into a bright child. With a family like hers, she is sure to go on to great things.