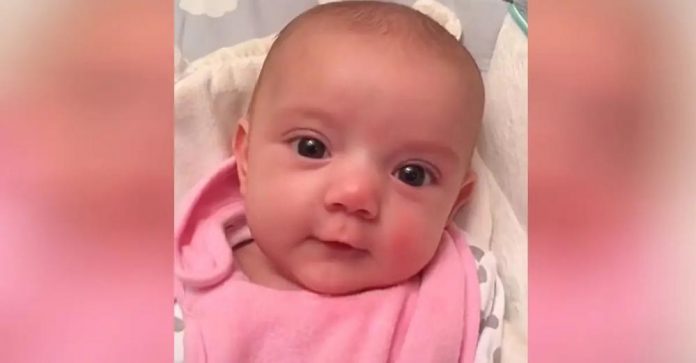 They say that children are growing up faster than ever nowadays. But this newborn is in a league of her own.

The baby in this video is incredibly intelligent for her age. From the day she was born, her parents could tell that she was smart.

There was just something about her eyes that showed off her intelligence.

Then, as the weeks went by, the baby seemed fascinated by everything.

But as time went on, the parents wondered whether or not they were reading too much into the girls’ actions. After all, all babies are fascinated. Was she really taking everything in?

But then one day, the parents would seemingly receive proof that their child was in fact a teeny tiny genius.

The mom was talking to her. She asked the baby if she had a good Christmas. The baby responded with some baby talk. But in just a second, she was going to form actual words.

The mom then said “I love you” to the baby three times in a row. After the third time, the baby clearly attempted to say it back.

The words may not have been fully formed, but she was clearly trying to tell her mom that she loved her.

Then the mother laughed, not quite believing what she had heard. But luckily, she was filming this moment.

She played the footage back, and the more she listened, the more she was convinced that her baby was saying “I love you.”

Soon, the father uploaded the video to YouTube to see if everyone else agreed with them.

The video soon went viral. To date, it has gained over 8.3 million views. It also has more than 334,000 likes and 14,700 comments. People have been saying things like this:

When the video had this overwhelmingly positive reaction, they needed no more convincing that their baby was saying “I love you” or that she was a genius.

Who knows, this baby could become the youngest ever member of MENSA? If she’s saying “I love you” at eight weeks, then just imagine what she’ll be doing when she’s five years old?

But some people have to wonder whether or not the baby’s “I love you” was just a fluke. After all, perhaps they were just some similar sounds a precisely the right moment?

According to a medically reviewed article in Verywell Family, most gifted children are only able to say their first words at nine months old, or, in exceptional circumstances, at six months old. Other parents of gifted children have said that their children attempted to speak their first words at three months but that they failed because their mouths, tongues and lips were not developed enough yet.

Of course, there’s no way to prove whether or not the baby in the video was actually speaking.

Yet the article does say that average babies babble and make sing-song sounds at around six months of age. The baby in the video is clearly doing that at eight weeks, so she’s displaying advanced development, regardless of whether or not those noises were actually her saying “I love you.”

One thing’s for sure: the parents will still tell her they love her as much as possible!