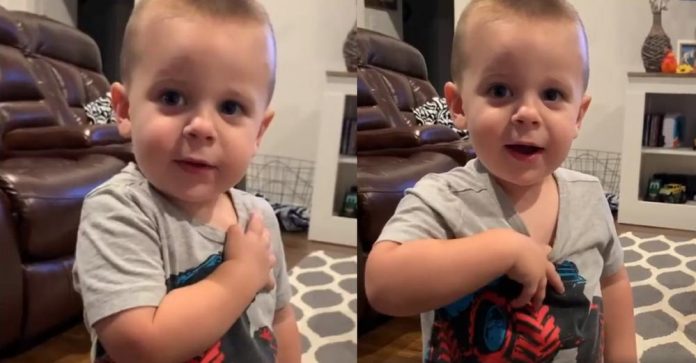 When this toddler goes to school, he’ll have no trouble reciting The Pledge of Allegiance. He’s only two and has it almost perfect.

Every country has its own way of showing pride and unity. America has The Pledge of Allegiance.

Children and adults across the USA know the pledge so well that it’s hard for many to think of a time when they struggled to recite the words. But there was a time!

And while the Pledge of Allegiance is only 31 words long, that’s a lot to remember for a toddler.

Lacey Nicole-Holmes recently posted a video of her toddler attempting to recite the Pledge of Allegiance, and it’s heartwarming.

The video shows the boy with his hand proudly placed on his heart (or thereabouts.) He just about gets through the entire pledge, although some of the words are pretty smushed.

But everyone can see that the adorable toddler is determined to get through it and do his country proud.

At the end of the video, Lacey congratulates the boy. He’ll have a head start on all the other kids when he begins kindergarten!

Luckily, Lacey captured her confident toddler’s recitation on video. She uploaded it to her Facebook page and was delighted when it went viral. To date, the video has gained over 2.5 million views. It also has more than 120,000 shares, 31,000 reactions and 3,800 comments. People have been saying things like this:

The toddler sure seems to have warmed the hearts of many people online!

Some older Americans may remember that the Pledge of Allegiance of today is slightly different from that of yesteryear.

It changed in 1954, when President Dwight D. Eisenhower got congress to add the words “under God.”

“I pledge allegiance to my flag and the republic for which it stands, one nation, indivisible, with liberty and justice for all.”

Of course, this pledge became popular in America, to the point where the words were altered to specifically reflect the USA, but not so in other countries.

It might be because most other countries don’t hold their national flag with such reverence. For instance, Professor Michael Billig, who teaches social science in Loughborough University, has said the following: “Let me just say that the American veneration of the national flag is not unique, but it is towards the extreme end of the spectrum.”

One other country that holds their flag with the same regard as America is Denmark.

For instance, Time has noted that Danes consider the Danish flag to be “a sacred and beloved object, a banner of joy and tolerance, of solidarity and community.”

At the end of the day, there’s no one way to love your country. But Lacey Nicole Holmes and her son show it by pledging allegiance. It’s important to them and many others, and everyone should respect the importance that it has to them.