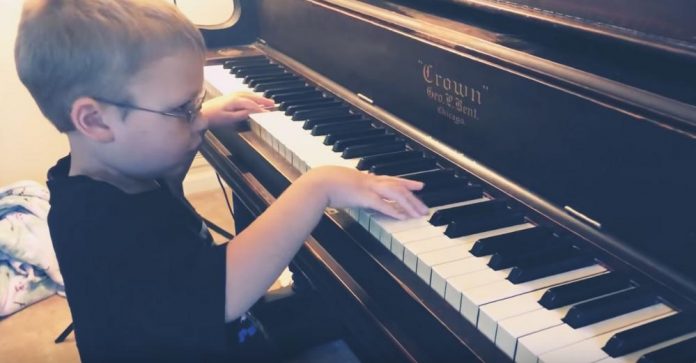 Avett Ray Maness first sidled up to the piano and started to play when he was just 11 months old. Quickly learning some tunes, his mother realized it was time to get him more formal training once he learned “Twinkle Twinkle Little Star.”

While Avett is mostly self-taught, he’s been given formal lessons on technique by a piano teacher.

But the now-7-year-old boy hasn’t learned to read music. Avett is blind.

He was born with a condition called optic nerve fibroplasia.

“He’s completely blind in one eye but has a little bit of vision in the other,” his mom, Sara Moore, told CBS News. “He’s significantly visually impaired. He walks with cane and he reads braille.”

But Avett can certainly feel the music and has an ear for it too.

“Music is in his body,” Moore said. “He’s really practicing on performing now. Since his talent is so amazing, people are asking him to perform.”

That’s in part because the little boy’s YouTube videos have gone viral – not just for his talent in the face of disability, but because he’s truly a natural – he even sings along in many videos.

Avett’s first viral video was posted to Facebook and didn’t involve the piano at all, however.

In it, he can be heard asking his mom to please text a video of his music to his favorite singer, Adele. At just 4 years old, he had assumed his mom had the power to do anything – and had anyone’s phone number who might be needed.

So far, Avett’s largest live audience has been 900 people, but millions have already viewed the Dayton, Ohio boy’s YouTube performances and he has over 100,000 dedicated subscribers.

This talented kiddo’s latest viral video is by far his most popular ever.

It’s a cover of Queen’s “Bohemian Rhapsody,” a song Avett heard in the Oscar-nominated Freddie Mercury biopic by the same name.

It was posted 11 months ago, but the video has now racked up over 7.3 million views!

His more recent covers include Elton John’s “Rocket Man” and Alicia Keys’ “If I Ain’t Got You,” but they aren’t quite as popular yet.

Moore says that her son’s musical tastes are always changing – and he’s even started rapping!

While Avett has already made a name for himself and has the benefit of a reputation, his mom is still frustrated that so few resources are available for blind and visually impaired children.

She’s even tried to help raise awareness by writing a book called “Cotton Candy Clouds,” which is based on Avett.

“He’s the character in the book,” she said. “Basically, he couldn’t see the clouds in the sky, so I wrote this book so he could see them.”

She hopes the book will serve as “a chance to talk about diversity and how everybody’s made special and we’re all born with our own gifts.”

“I teach people how to engage with blind and visually impaired people.”

“If every company would focus on inclusion … what a difference it would make for so many Americans,” she said.

Be sure to scroll down below to see Avett’s awesome performance of “Bohemian Rhapsody.”