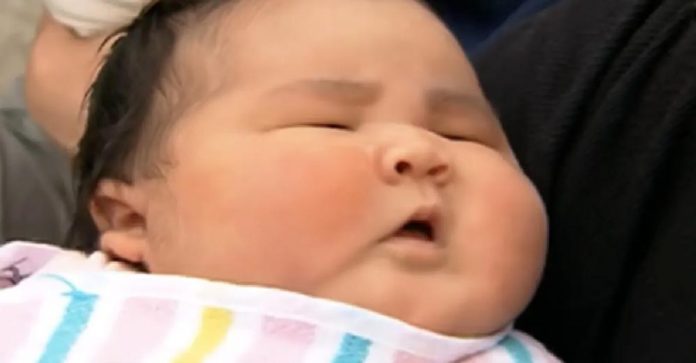 Men should spend their entire lives in awe of women. Women literally have to push people out of their bodies. At least most women don’t have to birth babies this huge.

When Melis and Ben Amey learned that they were having another baby, they were over the moon.

It would be their second child. Like most people who are expecting their second baby, the Ameys thought that they’d seen it all before. They were wrong.

Melis noticed that this pregnancy was much harder on her than last time around. She wondered if it was because she was a little older now. But then again, she could swear that her belly was getting larger faster.

Still, Melis convinced herself that she was just making things up, until she went in for a scan and the doctor confirmed that she was indeed carrying a larger than average child.

This news did not shock Melis.

Large babies had always run in her family. In fact, her first baby had been born above average size, at 12.3 pounds. But the doctor said that this next baby would dwarf the first one.

Still, Melis’s family had always delivered naturally, and she was determined to do so this time around. So Melis spent the months preparing for a birth that would be big, even by her family’s standards.

The birth was something else. True to her word, Melis went through with the birth naturally. Baby Willow came into the world in March 2020, weighing an astonishing 14.5 pounds. Luckily, she was also a healthy little girl.

Shortly after the birth, the doctors realized that Willow was now officially the largest baby ever to be born in Victoria, Australia. The previous record was set in 2018, when a baby came into the Australian state and the world weighing a mere 13.8 pounds.

On day one, Willow had to wear clothing designed for a three-month-old child. She also wears the same sized diapers as her older sister.

So will Melis have another go at breaking the record for Victoria’s larget baby? She is still recovering from the birth right now, so she still has some time to decide. The recovery might take a while. Melis is in good health, but the strain of the birth has meant that she has had to use a wheelchair for the time being.

A news report of the baby’s birth made its way onto Facebook, where it soon gained popularity all over the world.

Melis, her husband and their babies are lucky to have one another. The home will be filled with love.

But when Willow grows into a normal-sized child, the parents are sure to tease her with the news reports about her huge birth weight. She’ll grow up just like anyone else, except with the knowledge that she is Victoria’s largest baby.