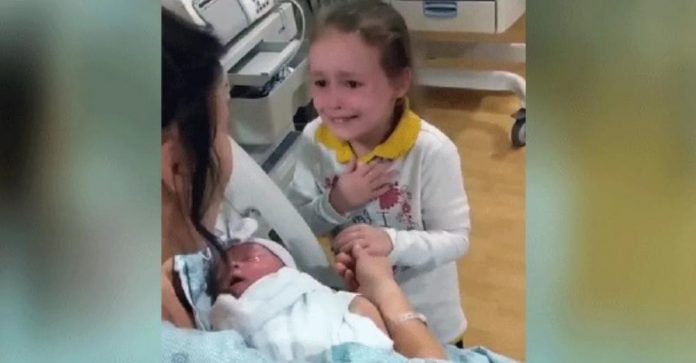 Adalynn had wanted a younger sibling since she could remember. When her sister finally arrived, she was completely overjoyed.

When most parents get pregnant with their second baby, they don’t know how their first child is going to react. Luckily, Adalynn’s parents knew that their daughter would love this news.

Adalynn had been talking about getting a little brother or sister (preferably sister) for years.

The child would always say that she wanted a sister for her birthday or for Christmas that year.

Erin, Adalynn’s mom, would explain to the girl that little sisters don’t work like that, but the girl persisted.

So one day, when the girl’s parents gave Adalynn the news she’d been longing for, she was over the moon. She was going to get a sibling, and it would be the best thing ever!

There was only one piece of bad news. It would take months and months for the baby to arrive. Adalynn would have to get everything ready for the baby in those months.

With each passing day, Adalynn would ask her parents if they could go out and buy stuff for the baby.

Erin was amazed. This baby was being spoiled long before it was due to come into the world. What would it be like when the child was actually here?

And then the good news got even better.

Erin went in for her scan and found out the gender of the baby. When she returned home, she had a mini gender reveal party just for Adalynn.

Erin told her daughter that her little sibling would be… A sister!

Adalynn had been hoping for this news for months. Now she was super excited to meet the baby.

Dale, Adalynn’s father, who came from a big family, told Adalynn to enjoy her time as an only child. She would miss it when it was gone, he said. But all that Adalynn could think about was spending time with her little sister.

And then, on time, Erin went into labor. Adalynn woke up one morning to find her grandma at home. She asked where her mom and dad were, but really, she already knew. They had gone to get her little sister!

Soon, Adalynn was able to meet the baby herself. Luckily, Dale was filming the moment when she met the baby.

The door opened, and Adalynn walked in. “I’m gonna cry!” she said, walking up to the baby, clasping her hands to her chest.

Then she got right up to the baby who was sleeping in her mom’s arms.

The girl could no longer hold back the tears. She completely bawled up, so happy to meet the person she’d been waiting for her entire life.

The best thing was that this was just the start of Adalynn’s journey. From then on, she would always have a best friend. The family decided to name the new arrival Madeline, or Maddy for short.

Maddy is now one month old. And she has no way of knowing it, but she’s given her older sister the best month of her life!