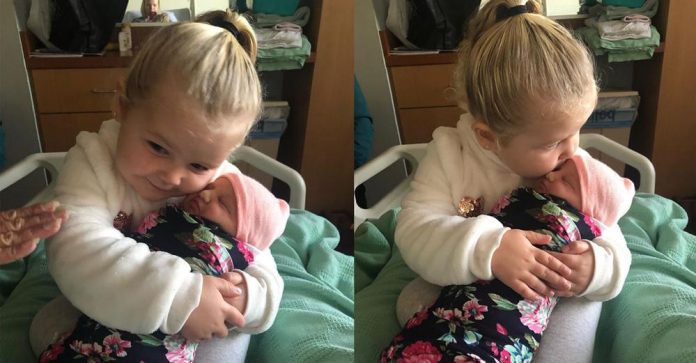 You never quite know how children will treat their younger siblings until they finally meet. But this little girl is sure to look out for her baby sister.

When parents announce their second, third, fourth or further pregnancies, the most important people to hear this news are the elder siblings.

The elder siblings can either be overjoyed or consumed with jealousy.

Of course, most parents can convince an upset child that their future baby brother or sister is a good thing. But the little girl in this video needed no convincing.

Molly Conley was two-years-old when her mom, Heather, told her that she was going to have a new brother or sister. The toddler was overjoyed to hear this news.

Molly already had an older brother, Jack, so she knew what it would be like for her future sibling. She was determined to be as loving to the newborn as her elder brother had always been to her.

So for months, Molly anxiously waited for the baby to come into the world.

Still, the months passed, and no baby was around for Molly to play with.

Molly’s little sister even missed her third birthday. But Heather told Molly to appreciate it. After all, it would be the last birthday where she was the youngest child. She’d never have that again!

Then one morning, Molly and Jack woke up to hear some exciting news from their aunt.

The baby, Cora, had arrived the night before. She was healthy but with her mother and father in the hospital. Molly’s aunt would take Molly to meet her sister as soon as she was ready.

When Molly arrived in the maternity ward, she was so excited to see her baby sister. She’d waited for this moment for so, so long. And all that was between her and Cora were a few doors.

When Molly saw Cora, she was overjoyed. Pretty soon, she was cradling her little sister in her arms. That was when she started making promises to the newborn.

Molly looked at Cora and said, in between kissing the baby, “You just came out of mommy’s belly. I won’t drop you… I won’t let you go anymore.”

Then Molly asked her mother if she could take Cora’s hat off. Heather said no, as the baby needed to stay warm.

Luckily, Heather was able to capture this heartwarming moment on video.

She soon uploaded the video to several of her social media pages, and the views kept on wracking up. Hundreds of people have reacted to the video, saying things like this:

Cora is sure to have a great life with a sister like Molly! Anyone can tell from this video that the toddler is going to look out for her younger sister and be her friend for life.