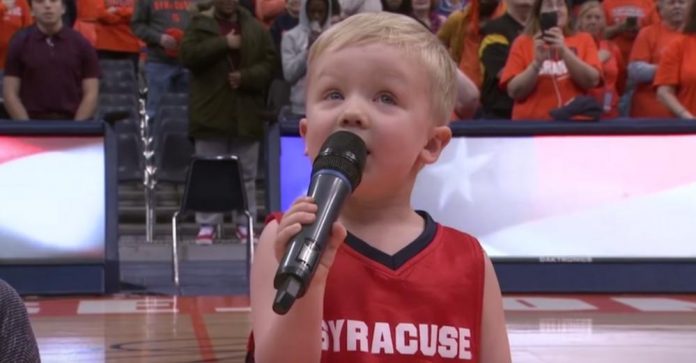 Rather, it was the pint-sized singer of the National Anthem.

Drake Grillo charmed the audience not only with his ability to perform without fear in front of a crowd, but to do so at his age – just 3 years old at the time this video was taken! He’s now the youngest person ever to sing the anthem in the Carrier Dome, according to a university tweet.

Drake’s mother, Chelsea, said her son is a big sports fan and actually learned the words to “The Star-Spangled Banner” over a year ago after hearing it enough times while watching sports on TV.

Even more remarkable is the fact that this didn’t even mark Drake’s first public performance – that was at the Auburn Doubledays’ baseball games last summer (when he would have been just 2!) – and he sang the anthem for them three times that season.

Chelsea told Syracuse.com that performing comes naturally for Drake — possibly because he isn’t scared yet.

“I just think he’s too little to realize how big of a deal it is,’‘ she said. “We just try to stay calm for him and not really talk it up. We don’t ask him if he’s nervous.”

Granted, mom is standing nearby throughout the performance.

The Syracuse-Niagara game was one of the Syracuse women’s team’s best attended games ever, with a paid audience of 6,093. And fans not only got to see their home team win on “School Day” but watch a tiny kid in a No. 44 jersey put on quite a show as well.

At his age, Drake can melt hearts even before he opens his mouth. He also takes his job very seriously.

Now, we’re not going to tell you he has the voice of an angel – he’s a 3-year-old shouting into a microphone, but the fact that he’s learned all the words and looks utterly unafraid in front of over 6000 people is more than most of us can say for ourselves.

Some of Syracuse’s players came over to Drake for first-bumps after his brave performance.

“I just think he’s too little to realize how big of a deal it is,” Chelsea said. “We just try to stay calm for him and not really talk it up.”

Even sweeter is that the little boy almost looks like he’s coming out of a trance when he’s done, finally realizing just how many people he’s been singing for, as he reaches for his mom while the crowd applauds.

Drake’s mom says the tyke likes to practice around the house by carrying a toy microphone around with him. The National Anthem is his go-to tune, but like any kid, he’s also looking forward to the holidays.

“Right now he’s into Christmas music,” she said. “So he sings that.”

While Syracuse beat Niagara that day, we think Drake is the real MVP of that game.

Be sure to scroll down to see Drake’s endearing performance.