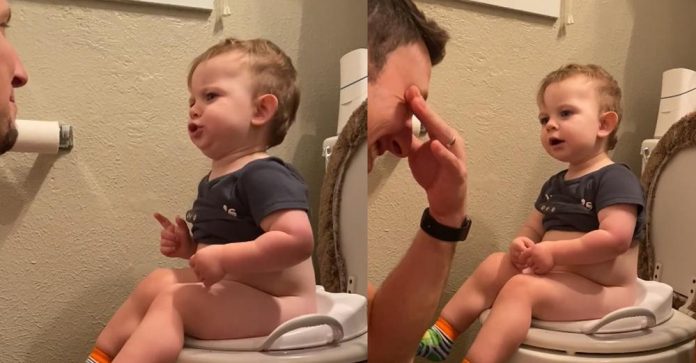 The child is going to hate this video when he grows up. The dad asks him how his potty training is going, and the kid gives a gutsy response.

Everyone’s parents have that photo, that video or that story of them saying or doing something as an infant that was so funny at the time. But years later, it’s cripplingly embarrassing for the child.

When that child grows up and brings a boyfriend or girlfriend over, it’s the first thing that the parents will show or tell them.

But the problem with the social media age is that that embarrassment has the potential to go viral.

Just imagine how the boy in this video will feel when he gets to the age where he can make his own social media profile and find this video online.

The video is undeniably hilarious. The child, Matty, is a toddler who is currently doing what we all did at that age: potty training.

Matty has a huge personality. So Matty’s mom often records him saying and doing funny things. Recently, when Matty was on the potty, he started saying something so funny, the mom just had to hit record.

The video cut in with Matty saying “I didn’t poop, I peed.” The kid thought that this was hilarious, in the way that children always do. But to make the joke extra funny, he put on a sassy voice.

Matty’s dad then asked him if he pooped. The boy responds with an even sassier “No, I peed!”

The boy repeated this a few times, and the dad couldn’t keep it together anymore. He had tried to not laugh at the child’s immaturity, but the dad was just a child at heart and finally broke down into a fit of laughter.

In fact, the dad started crying. Yes, he found it just that funny. But Matty got confused here. Up until this point he had only associated crying with sadness.

Clearly, he thought that his words had been incredibly hurtful to his father.

The dad then tried to explain to the toddler that sometimes you can laugh so much that you start to cry. Matty didn’t quite get this at first, but then he realized that his dad was actually enjoying his silly voice

Satisfied that his father wasn’t having a breakdown, Matty then started saying his “I didn’t poop, I peed,” routine again. This time, the dad didn’t try to act too mature to enjoy it and hi fived the boy.

But it wasn’t just Matty’s dad who loved this moment. Matty’s mom uploaded it to Facebook shortly after, where it quickly went viral.

It seems like everyone in the entire world loves this video of Matty on the potty.

It’s just a shame that the star of the video will grow to hate it in a few years’ time. And then he’ll have to face the fact that millions of people have watched this moment online!